A B♭ in my bonnet

There’s no shortage of material about George Russell’s “Lydian Chromatic Concept” on the ‘tubes, but much of it is geometrically justified by some interpreters and – consequently - may come across as something from the Green Ink Brigade, i.e. a little cranky.
But the geometry seems sound, being as it is just a representational consequence of a harmonic ‘reality’ – at least no less so than the “cycle of fifths” is based on the fifth’s frequency’s being (classically, anyway) 3/2 times the root note’s frequency (or 27/12 times, if you’re well-tempered). As this is aurally (arguably, I suppose, since everything’s arguable) the next most obvious interval after the octave’s 2/1, its importance in music is well established.

If you allow the standard 12 hour clock (or dodecagon) as both a useful and reasonable model for talking about dodecaphonically partitioned octaves then you’re already happy about (by which I mean that you are mathematically and unavoidably led to) using twelve 7 semitone jumps having as much legitimacy as a ‘generator’ of all 12 notes as is the more direct single 1 semitone stepping up the sequence. That's because 7 (and 5) is relatively prime to 12, just as is 11 (and, trivially, 1).

If you’re comfortable (and many are not) with letting the maths repurpose its role from being merely a usefully descriptive modeller to its being a prescriptive constructor of musics, with a constructor's often concomitant value judgements, then the Lydian ends up as ‘tops’. It cannot help it!

So if you decide that the (diatonic, seven note) scale you’re generating is to begin on the tonic note of that scale (bearing in mind that - modally – you're quite free not to) then starting on (for example) C takes you to G then D then A then E then B then F#, at which point you stop (you've got your 7 notes) and reorder those notes into the (tada – Lydian, not Ionian) scale/mode with that telltale sharpened fourth. And its relative ‘minor’ is of course three semitones back to starting on the A, with its F# making it a Dorian and not an Aeolian (which would have the F).

Another way of seeing the ‘distinguishedness’ of the Lydian is to order all 7 diatonic modes alphabetically (which, as it happens, turns out to be numerically) with their halfstep/wholestep descriptions (not their names - that would be silly).

Which is – effectively – the modes ordered by their ‘majorness’ starting from the most minorish. And there’s the Lydian right at the end of the list, with the Ionian coming in only as the runner-up. Naturally the 'ugly duckling' Locrian brings up the rear (but personally I'm quite fond of that next 'loser', the Phrygian).

Note that these (key independent) semitone-step-determinatives of the diatonic modes are the exact same consequence of the ‘generative fifthiness’ – there’s no new information there - but it’s still interesting.

This kind of modelling will work with any sized scale built up from stacked fifths – perhaps the next most familiarly the pentatonic (with its five modes) embedded within 12-note systems.

There’ll be a ‘most major’ ordering (the ordering with all the biggest skips at the beginning of the scale) of an octatonic scale too. It’s 22122111, the dominant bebop scale (=Ionian plus an extra – functionally dominant - seventh), since you ask. As to why you'd select that particular octatonic (and its eight - permutationally cycling - modes) pattern of steps (as opposed to - say - 22221111, or 23112111) it's because we're (here) considering only scales constructed with stacked fifths:

Note that - as is typical with paired n-note and 12-n note scales - the 'majorest' 12-n note scale is one of the modes of the scale constructed from the notes missing from the n-note scale. (Hexatonic scales are, naturally, their own 'anti-scales').

This construction principle will also work with scales embedded within the more exotic world of microtonality. Consider, for example, a scale divided into 17 'equal' (or as near as dammit) divisions. This, by the way, is a real thing. To generate the 'best' (value judgment!) scale/mode from some root note of this scale, you'd ascertain which of the 16 remaining notes was nearest in frequency to 3/2 times the root note. If it's an even-tempered microtonality (it need not be - that's a human choice, not some law of the cosmos) then 210/17 ≈ 1.5034, comes closest to 3/2 (almost as closely as does 'our' 27/12). In other words, the most consonant sounding scales within a 17 note microtonality would be generated from its 'cycle of fifths' based on 10 (as opposed to 7) semitone jumps.

Below's a picture of an imaginary heptadecaphonic piano with 17 note scale support. You could play with both thirds (minor and major) and with both kinds of sevenths (minor/dominant and major) without ever leaving the white keys, in its "C-Major" mode. Although we - like Miles Davis - would think of the piano layout as being based on a white-noted F-Lydian, with a middle F. 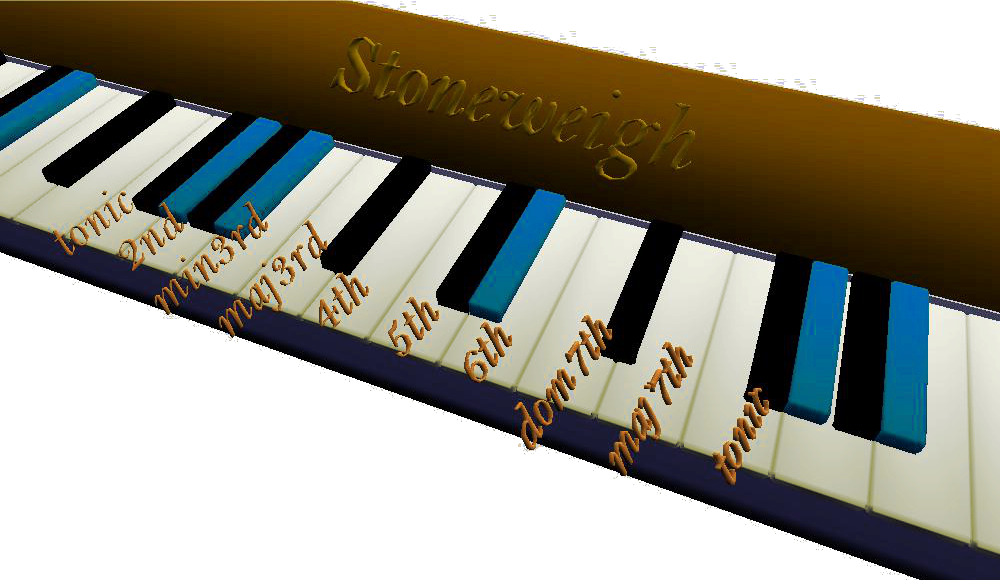