Let's agree that you're acquainted with both binary numbers, and that you recognise the existence of the 12 notes - commonly, conventionally and routinely labelled C, C#, D, D# (or E♭), E, F, F# (or G♭), G, G# (or A♭), A, A# (or B♭) and finally B - of the full even-tempered western chromatic scale.

Or is it? Maybe it's the A Minor scale. In fact, if you know anything about the old Greek (or Church) modes and names like Phrygian and Mixolydian mean anything to you, it could be a Phrygian scale, beginning on the E (the fifth bit from the left in the binary)?

This illustrates a problem with using all 4096 binary numbers to identify a 'scale object'. Which is to say that you need two markers - one to represent the first note of the set of all notes from which you select your scale notes (where here, the 'mark' is the special significance accorded to the 12 o'clock position, representing both the leftmost bit of the binary number and the pitch C), and another to mark the first note of the scale you're intending to represent (where here the mark is that red mark at 4 o'clock).

To further illustrate, suppose we rotate the above figure by fifteen degrees (i.e. one hour) anticlockwise. What do have now - with the bit string 010110101011? The C isn't in this scale, the 12 o'clock is not 'on'. The decimal value of the binary number is less than 2048. Is it a B Major scale, with the first note at 11 o'clock, perhaps? Or an A♭ Minor scale, or a Locrian scale mode starting on B♭? So many ambiguities.

One may claim that - although ambiguous - they're all really 'the same' in some deeper abstract sense. A sense defined first by the number of vertices and second by the 'shape' of the polygon. And one would be quite justified in doing so, to the extent that one did not care about modes but only the absolute values of the pitches contained in, or perhaps the set of intervals embodied by, your chosen scale.

It seems to this author, however, that what is least important in a musical scale is the actual pitches incorporated within it. After all, if we really care about those (maybe we have a Russian Basso Profundo who needs to perform a soprano part) we can take our piece of music and transpose it into the key most comfortable for the performers. We'd rather not 'care' about any named key, but instead work with key-less abstractions. We'd rather concentrate on the pitch classes (represented by the modulo 12 integers 0 to 11) and the intervals between the notes. We'd rather care that the scale is a Minor one, and not so much that - in particular - it's C# Minor. We're more interested - and deem it far more important - that we know a tune is set in the Lydian mode. And not so much that its tonic note is G.

Accordingly, in this place, we consider only the 2048 possible keyless scales. The most significant bit will always be set 'on', the numbers identifying all such possible scales lie between the binary (decimal) values of 100000000000 (2048) and 111111111111 (4095). All polygons will have a vertex at 12 o'clock - if you see one without a vertex at 12 o'clock then it's an illegal immigrant and not of our universe. (Please do make it feel welcome though - it's unable to steal one of our jobs and anyway we're not monsters.)

The 12 o'clock position is thus freed from any attachment to the pitch known as C, and now represents simply - and simultaneously - the single first and tonic note of any scale represented by its labelling binary number. One may now instantly tell an Ionian mode scale (as the above figure now exclusively and unambiguously represents) from a Dorian mode scale (shown next) - we just don't know the key any longer (The red marks are actually for something else). 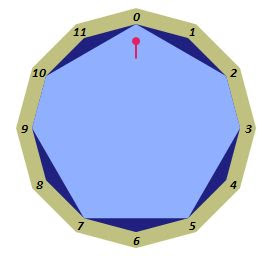 One may also see that the two polygons are, in fact, 'the same', insofar as this second one can be rotated two hours clockwise to become the first. (N.B. the outer 'hour' ring stays put in all such rotations). One can also soon appreciate that there must be seven such rotations of this particular shape (since the 12 o'clock must alway be occupied by one of the seven vertices) - just what you'd expect with your knowledge of the seven modes.

Note that this decision is not without its own shortfalls. Notwithstanding the aforementioned abstractional liberations, we do lose something - notably the immediate and obvious connection between the western Diatonic scale (or scales, if you'll allow the other six modes) and the Eastern Pentatonic scale. Just look at the five pitch classes missing from the Western Scale. They form a pentagon representative of precisely that Orientalism. But we cannot allow it because the 12 o'clock vertex is perforce unoccupied. Now obviously the major and minor pentatonic scales are eminently representable and identifiable within our system - we just need to rotate the 'anti-pentagon' until a vertex clicks into the appropriate 12 o'clock position and we're all done - we have orientalism. But it's a shame that it's necessary to do this as it removes (or at least obscures) the coupling between that particular heptagon and that particular pentagon. The coupling is real, in that both scale systems have the maximum number of perfect fifth (and, symmetrically, fourth) intervals possible within them. They're both pretty special scale systems.

The author has - briefly - considered the idea of going for an 11 vertex undecagon on the grounds that since the tonic note is guaranteed to be present, there's no real need to explicitly show it (at 12 o'clock). We can then identify all 2048 possible (keyless) scales with an 11 bit binary number. Scale zero would simply be the monotonic scale and scale 2047 the full dodecatonic chromatic. In this case, the diatonic scale (in Major - or Ionian Mode - orientation) would be represented as 01011010101 (since a lead zero is now permitted) and the Major Pentatonic would show up as its complement - i.e. all zeros to ones and all ones to zeros - a nicely obvious coupling - 10100101010. But - because of that assumed implicit 'on', then that's a six note scale and therefore cannot possibly identify the complementary pentatonic we seek. So - apart from looking weird and Dali-esque, a slightly melted clockface doesn't help in the very regard we'd like it to anyway. And it would obscure so many other things.

So, despite the 12 bit binary representation carrying a spot of redundancy in its 'always-on' top bit, we'll stick with it and maintain the claim that it has enough of an edge over the maximally more efficient 4096 value space which loses too much musically significant semantic.

Here's an animation of all 2048 polygons. They're in identifier order, from 2048 to 4095. Which does little to show the order and structure of the scales. And it's (possibly annoyingly) interminable. But, it's complete and thus worth something.