It has been a while since we looked at invertible scales and it might be worth a brief recap, starting with the Dorian mode of the diatonic pitch class set. This being the one with which we in the West are most familiar in its guises as the major and minor scales – or Ionian and Aeolian modes. From hereon in, we’ll abbreviate pitch class with PC.

By inversion, we mean reflection – or more accurately subtraction (see our earlier Pitch Axis Considered Harmful). By an invertible PC set, we specifically mean that the act of inversion – i.e. subtracting (modulo 12) each of its PCs from a certain fixed number - does not take you out of the set.

We start with the Dorian mode as it’s the most obviously invertible scale mode by anyone familiar with a piano, starting on a middle D and playing up and down the white keys either side of it. The piano keyboard is at its most obviously symmetric when you gaze at any D or A♭ key. If the D is PC 0 - usually represented on a twelve-hour clock-face as 12 o’clock (i.e. n00n!) - then the scale (which is to say the Dorian mode) seen as a seven note ‘motif’ is 0 2 3 5 7 9 10 (DEFGABC). Moving left (or anticlockwise) we also start at 0 but subtract and end up with the inverted sequence of negative numbers 0 –2 –3 –5 –7 –9 –10 (DCBAGFE) which, after adding 12 (an octave) to each (which is equivalent to adding 0, itself equivalent to doing nothing whatever to alter the essential nature of the inversion), gets us 0 10 9 7 5 3 2. And all of those numbers (and notes) remain a Dorian PC set’s PC numbers (and white keys).

The invertible PC set however, regardless of mode, is the same particular ‘shape’ if you care to look at it as a polygon and – as such – does not alter at all. The shape just rotates around its centre. As such, its axis of symmetry is simply carried around with that rotation. There may of course be more than one axis of symmetry in other, non-diatonic, PC sets.

There are also scales which are not invertible such as the (pentatonic) Hirajoshi, the (hexatonic) Blues, the (heptatonic) Hungarian Major (which we’ve discussed), the (octatonic) Bebop Dominant Flat Nine and many, many more.

A Digressional Touch of Polemic

The 'interval skip pattern' notation, employed in the preceding diagrams, is simply a ‘key-signature’ independent representation of the semitone steps between each note of the scale, starting at its root or tonic note (twelve o'clock in the diagrams!), with the final step ‘returning’ you to the tonic (an octave above) regardless of whether or not the scale or mode is F Dorian, C# Hirajoshi or (if you’re one of those) a 432Hz-based-A Bebop Dominant Flatnine. This (completely scalable) interval skip pattern scheme works for systems other than twelve tone – indeed it works with any fixed octave-based microtonality and it doesn’t even need to be well-tempered (although the scales will sound different of course). Skip numbers simply have to total up to the number of microtones in your octave, and the number of skips (perforce not more than the number of microtones) must match the number of notes in your scale.

The 2212221 skip pattern (of, specifically in that case, the Ionian mode of the ordinary ‘diatonic PC set’) simply rotates as 2122212 (Dorian), 1222122 (Phrygian), 2221221 (Lydian), 2212212 (Mixolydian), 2122122 (Aeolian) and 1221222 (Locrian) and carries its axis of symmetry around the clock as it does so. They are all regarded as the same PC Set (classified as Forte Number 7-35 in Allen Forte’s naming system). In that sense, modes are regarded as equivalences of the skip pattern, which is similarly regarded as a single pattern of interval skips, without being particularly bothered about which skip comes first.

For instance, with a seven note scale embedded within a twelve tone chromatic space, there are only two ways to have scales comprising only whole tone or semitone skips without two consecutive semitone skips. One of them is with three 2s and two 2s separated by 1s (they must, after all, add up to 12 in total). The only other possibility is four 2s and a single 2 separated by 1s. (Five 2s would leave only space for the forbidden two consecutive 1s). This alternative pattern (2222121, say) is also symmetric and also has seven modes. But it looks as if only six of them are in (reasonably, and variably so) common use.

The axis of symmetry is marked with a yellow line. The Hindi scale, like the Dorian, is tonic-invertible in that subtraction from 0 will keep your PCs firmly inside the Hindi ‘mode’ of the PC set 7-34, the Forte Prime Form of which is known as the half-diminished scale (aka the Locrian Super in the above).

If you forego the restriction preventing your scales comprising only semitone or whole tone skips, you may permit yourself a sesquitonic (one and a half tone, or three semitone) step (or two). Such a pattern might be 1131213 – again, all of the numbers must add up to 12. This is PC set 7-22, turning up as the Double Harmonic scale. This PC set is invertible and here are three further modes which, due to historical and geographical accident, are also known as scales in their own right (despite their all being simply modes, or rotations, of each other).

The distinctly non-PC (in the other sense) term ‘Gypsy scale’ is something that, alas, we can’t do very much about any time soon. Scale names are much too firmly embedded in musical language and history. Despite the obvious advantages of describing/classifying scales (and even modes) completely and unambiguously by numerical interval skip patterns, there’s pretty much no possibility of the more rational nomenclature prevailing any time soon. We just have to put up with the fact that the naming of musical scales is both haphazard and arbitrary. In short, the current space of scale names is clearly not scalable.

There are many other seven note PC sets. We (but we were by no means the first) counted 66 distinct (within modal, or rotational, equivalence) patterns back in that first post and we also noted that only 10 of those 66 were symmetric. In fact we observed that – regardless of the number of notes in a scale of any length (from 1 to 12 within the twelve-tone series) – the majority of PC sets are unsymmetric. Which is not to say that, worldwide, some musician has not come up with a scale which employs them (as, for example, the aforementioned Hungarian Major, demonstrates).

How about eight note scales? We know there are 43 PC sets containing eight PCs, and that only 15 of them are symmetric. A few, like the heptatonic sets, can be constructed with the restriction that they contain only whole tone or semitone skips. But this time, because the scale is so crowded with notes, consecutive semitone skips are unavoidable. If three consecutive skips are whole tone then you must fit the remaining five notes – best case – within a span of six semitones (or fewer, if all three whole tone skips are not consecutive). If five skips are whole tone then that’s ten of the available PCs already accounted for, leaving you no room at all to fit in the other three PCs. Four 2s and four 1s seems to be a good compromise and the 21212121 pattern – which is doubly symmetric on two axes – is found in the usual pair of Jazz scales commonly called ‘octatonic’ – one of them starting with a whole tone, the other with a semitone. But there are other – single-axiswise symmetric – scales:

We already counted, right back at the beginning, how many three note, four note, five note etc scales were inversions of themselves - we reproduce the distribution here: 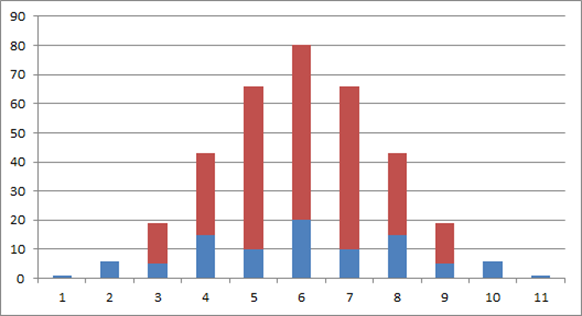 The bluish bars represent the minority of invertible sets and the reddish the uninvertible ones within each set size. The sequence for k-note scales is 1, 6, 5, 15, 10, 20, 10, 15, 5, 6, 1 for k=0 to 12. We didn't bother to chart the extremes (of 0 and 12) because, trivially there's only one way to have an empty musical scale (bound to be reflectionally symmetric), and also only one full 12 note chromatic scale - obviously very symmetric indeed.

If you make the further equivalence between those shapes which are mirror images of each other (i.e. although you cannot rotate one to completely match the other, you can rotate its mirror image to match it) then those 352 shapes reduce to 224. As the 96 symmetric polygons already were 'equivalent in the mirror' they're not quite as rare amongst this reduced set.

If you remember your early geometry classes and remember your triangles, you may recall the difference between congruent triangles and similar triangles. In this regard, polygons are people too, as it were (notions of similarity also include not having to be the same size, but that's not relevant here). Additionally the general case of the haphazardly shaped polygon might remind you of those undistinguished scalene triangles. Isosceles triangles are analagous to our symmetric polygons.

What about other microtonalities? Our '96', '224' and '352' counts are but one case (the '12' case) of well known integer sequences used to count bracelet or necklace arrangements. You may encounter the terms 'necklace' to model those patterns with rotational equivalences (our larger 352 case) and 'bracelet' to model a flippable necklace - i.e. patterns with the additional reflectional equivalences (the 224 case subset) and - still further - bracelets which are also symmetric.

The first two are, respectively and more formally, examples of Cyclic and Dihedral groups in Group Theory. The following tables show three entries in the Sloane Catalogue of Integer Sequences (the OEIS is the online version). The various headings for each sequence come from that catalogue.

But we are modelling scales (or, more abstractly, PC sets) as k-sided, or k-pointed (it's the same thing - a PC set with k members) polygons picked out as sub-polygons of the 12-sided 'chromatic dodecagon'. It turns out that the last series can be rather nicely captured by the generating function:

where the pn (for n = 1 and upwards) are the exact same values in the third sequence above. (For completeness, p0 = 1.) This generating function is given in the Sloane catalogue, but without that rather mysterious 1 we've slipped in, with a comma, before the z. What’s that all about?

In fact it is an application of a more general generating function of two variables, u and z, evaluated at the value of u = 1. This function is:

The apparently unnecessary double summation tacked on to the end of that function is there for a reason - it allows you to pick out the individual counts for k-sized scales inside n-sized tuning systems for any n and for any k (perforce less than or equal to n). All you have to do is expand the rational polynomial as a power series in u and z. Which is pretty straightforward.

In general, for musical systems with an even number of divisions (like our familiar 12 tone), we have that:

And that for musical systems with an odd number of divisions (e.g. 17 or 19 tone systems):

You may also wish to verify that - if you want to count all invertible scales, regardless of k, for each of those values of n, just set u = 1 (pn = Pn(1)) in the above.

As a fun application, consider all of the triads available to a musician playing with the aforementioned 17 note system, which can be represented with a 17-gon. We pick out

and expand powers of u to obtain

and we can immediately see (from the coefficient of u3) that 8 (out of the possible 40 from the well known dihedral symmetry enumerations) triads are self-inversional. Below is a diagram showing all 40, with the 8 self-inversional triads as isosceles triangles in blue and the remaining 32 non-inversional, as 16 mirror pairs, in salmon.

Posted by LemoUtan No comments: Links to this post