On a bright cold day in February of MDCXLII (though we doubt the clocks were striking XIII), Matthias Steyn and Marie van Napels got married in Haarlem.

Each of the three lines is a sequence of single notes and can be written as a path without regard to their length or octave. The first line is C, D, E, F, E, D, C♯, D, E, F, G, F, E, etc and it can be represented as a directed graph: 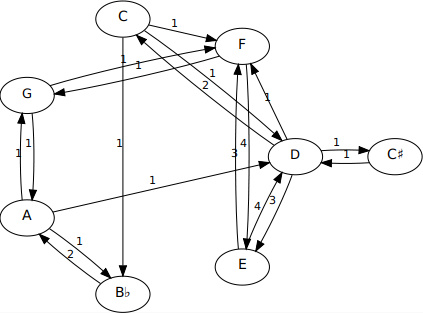 where the arrows represent the transitions between consecutive notes in the melodic line, and the numbers on the arrows indicate how many times such a transition happens within it.

We're now ready to play a game with this graph.

All of which sounds distressingly bike-unfriendly, notwithstanding an evident tricycle tolerance, but these are technical terms.

A unicycle is an arrow leaving a note and going right back to it without any intervening notes. This particular line has none, so there's nothing to do here. But Cantus II has a unicycle at bar 13 where a C is 'restarted' in bar 14. The Bass line is, like the first, devoid of unicycles.

A bicycle is an arrow from one note to another where there's also an arrow from that second note back to the first. There's an obvious one on the left of the above figure between G and A and also on the right between D and C♯.

Where there are multiple arrows in both directions between a pair of notes, we simply cancel opposite pairs and any that remain - perforce in only one direction - are retained. Thus the single arrow from A to B♭ will cancel one of the two from B♭ to A, leaving only one arrow from B♭ to A. Thus we end up with: 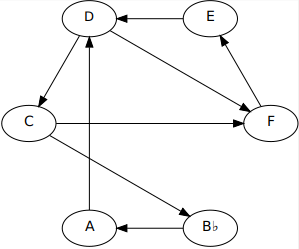 Notice that we've completely lost two notes, C♯ and G. This is because both these notes were attached to each of their immediate neighbours by completely cancelling bicycles.

Note also that we've lost the numbers on the arrows. This is because bicycle cancellations - mostly - leave only one arrow which we shan't bother labelling with a 1. If two (or more) arrows remain, perforce in the same direction from one note to another, we shall draw them in explicitly - similarly unlabelled.

In fact this occurs in both of the other lines which we shall now process. First, Cantus II: 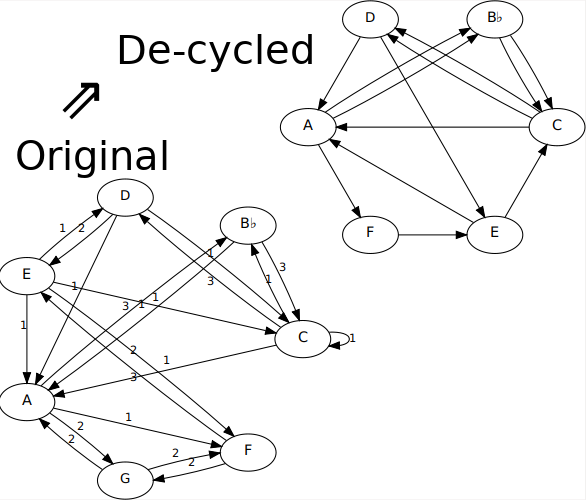 where, for example, the unicycle at C has been removed and one of the three transitions from B♭ to C has been cancelled by the lone transition from C to B♭, leaving the two arrows shown. Notice again that G has been banished since it was connected exclusively by cancelling bicycles.

Finally, we'll go straight to the de-cycled version of the bass line: Obviously it's possible to find a path through each of the original graphs since that's how they were constructed in the first place.

You're allowed to start wherever you like. Let's reproduce the three graphs together here:

Musical considerations (the original is in either F major or D minor [OK so it might be B♭ Lydian, etc, too]) indicate that since we're beginning the first line with a C that we might consider the piece as being in F major and that we start with an A in line 2 and F in line 3 (or vice versa).

This is convenient - it also ends in F major, albeit sans its 5th. It's beginning to look like we can get a half-decent 8 bar sequence out of this. For example:

And here's another one:

If your browser supports it, these two chunks of pressed Padbrué may be heard (twice each) with the player below.

These are two (re-)compositions from the same three paths, and it's clear that - musically - there's no real limit to expressions of such 'distillations' although they'll probably all sound a bit 'samey'.

But is there a limit to the number of paths through any of these note-gardens? Are these the only paths? Can you find any others?

One is tempted to believe that - given their construction from a guaranteed initial path - there will always be at least one path in the reduction. But the pruning is pretty brutal - we can, after all, lose notes - so have we just been lucky with these three examples?

By the Way, thanks to