As the previous article mentions, the following ‘motif’ (scare quotes because of what follows) begins with a long run of thirds:

This, the Berg Violin Concerto's 'defining tone row' is the one catalogued by the ‘34433443222’ interval class index in Wikipedia’s list of tone rows (hereinafter referred to as wLOTR), which cites this concerto as its principle reference. Fripertinger's more technically exciting Database on tone rows and tropes also indexes the works discussed here with the exact same tone row or interval sequence keys (it's not clear if the Wiki page is based on this). So it might be interesting to investigate how this particular sequence came to be the one elected to characterise the entire opus.

As a more general question, of all of the instantiations of a tone-row within a work, how does one decide which of them is ‘prime’? For it is a well-known problem, as Peter Castine reminds us, at the beginning of §2.9 in his Set Theory Objects (Europaïscher Verlag der Wissenschaften; Musicology, Peter Lang 1994):

“The main difficulty in set theoretic musical analysis is not so much that of recognizing relations between pc sets, it is deciding which notes in the score should be analyzed as pc sets. This is called segmentation. Once segmentation has been established, much of the remaining work is mechanical; [etc] …”

We should also consider Babbitt’s contributions to the concepts of serialism and what might be called ‘tone-rowism’. He writes (of Schoenberg - whom he knew - and of the nuances of translating German into English)

“The word Reihe bothered him because it became row. And to him row suggested left to right – something in a row – and that’s what it does connote. And that connotation, he thought, was part of all these misunderstandings about the twelve-tone notion having to do with some sort of thematic, motivic thing that went from left to right. It upset him, so he asked various friends about it.

[omitted paragraph on how series was suggested, and rejected, as translation for Reihe]

And I regret to tell you, I am guilty. I suggested the word set, which had absolutely no meaning in music as yet. It came out of mathematics (not that that pleased me particularly) and it seemed to be a neutral term. Of course, a set does not mean anything ordered, but if you append twelve-tone or twelve-pitch-class to the word set, then that implies an ordered set and that’s a very familiar structure, too, in abstract relation theory. So there we were.”

This is from chapter 1, “The Twelve Tone Tradition” of Milton Babbitt’s “Words About Music”, Dembski and Straus (eds), from the University of Wisconsin. You may read much of this book in google’s academicals, but not – unfortunately - this particular bleeding chunk since pages 11 and 12 are ‘not shown in this preview’. You’ll either have to take my word for it or find a real copy, but as Babbitt’s generally a fun read, it’s worthwhile.

So Babbitt claims that Schoenberg never intended that all twelve tones must be played out (exhausted if you will) in order, before you were allowed to proceed to any of its transformations (i.e. its repeats or retrogrades or inversions). Although this does not seem to square (advance pun warning) well with later attentions paid to the construction of P-R-I-RI grids, aka Babbitt Squares, it just means that these are possible playthings, not necessary ones - and a comparatively recent invention unused in the composition of the pair of works discussed here.

In any case. musicians may write what they please, even the (Babbittally argued) most intellectual of the Berg-Schoenberg-Webern group, Berg himself, to whose concerto’s tone-row ‘signature’ we now return.

In the score’s introduction (Universal Edition Philharmonia Partituren #426), “F.S.” (Friedrich Saathen) describes the above tone row (G B♭ D F# A C E G# B C# E♭ F) as being ‘the one from which the Concerto is made’ (presumably what we might call its prime ‘P0’ form). Attention is drawn to the G D A E, the four consecutive perfect fifths of the violin’s open strings, embedded within its head and also to the terminating tritone resulting from the last three (actually four, if you include a wraparound) whole tone steps. And of course the concerto begins with those four open strings. Clarinets and harp provide the interstitial B, F# and C in the first two bars. They also throw in some Fs, but as these could conceivably have come from some unheard previous row’s instantiation (n.b. F is at the end of the model above), we concede its legitimacy (no, we’re not serious).

One of the focal points of the concerto, in the second half, is at bar 195:

where the soloist comes in (the p at the middle of bar 196) with the entire tone row (interval classes at the top, zeroed-out pitch classes at the bottom) :

This (unsigned) 'P' string is only 11 characters long. Fair enough; it represents, after all, skips between 12 pitches. But it already (accidentally) sums to 36 (a multiple of 12). If you take the signs (the directions of the interval skips up+ or down-) into account then they sum to (respectively) -6 and (for the 'I' string) +6 - thus telling you the size of the next skip to the beginning of a second instance of the tone row. In applications of tone rows - actual instantiations in real written down music - that final skip seldom matters because the next occurrence of the tone row is very likely not going to be a repeat of the exact same P (or I) form beginning with the same note as before, so the relevance of the 6 would be somewhat moot.

It's extremely annoying that such indexing will work only by re-instituting all 11 intervals, foregoing the (incredibly useful) joy of having to contend with only 6 interval classes and thereby 'dis-integrating' the hitherto similar representations of (no longer visually identical) inversions. But when indexing tone rows by their internal intervals - where intervalic direction actually matters - it's unfortunately necessary. Pitch class sets, in contrast, may be safely indexed with interval class digits only since there are no sequences to contend with because pitch classes just 'stand there', motionless.

Regardless of indexing issues, we can see that Webern's tone row is much thirdier; almost, but not quite, as thirdy as you can get.

In wLOTR (loc cit) it’s the immediately preceding entry (if sorted by interval class, at the time of writing – there’s lots of possible room for expansion, so who knows how long this will stand). And the tone row entry that it falls under is indexed as 0 3 e 2 t 1 9 5 8 4 7 6 (or 03B2A1958476 in the alternative popular tone-row labelling scheme), which looks like this (if you regard the leading F# as the 0).

The interval class jumps (+ or – omitted as obvious, when you can actually see the directions) annotate the bottom of the illustration. Remember that, interval classwise, descending a major or minor sixth is the same as ascending (respectively) a minor or major third (and vice-versa). It’s why interval classes (which is one of the ways the wLOTR Wiki is indexed) are in the range 1 to 6 and not 1 to 11, as discussed above. I.e. the indexing is actually a string of ±3±4±4±3… where the ± is not shown but is to be taken as ‘understood’.

The work cited by that index (or indexed by that citation) is the second of Webern’s Drei Lieder (Op 18) of 1927(ish), "Erlösung" which begins thus: 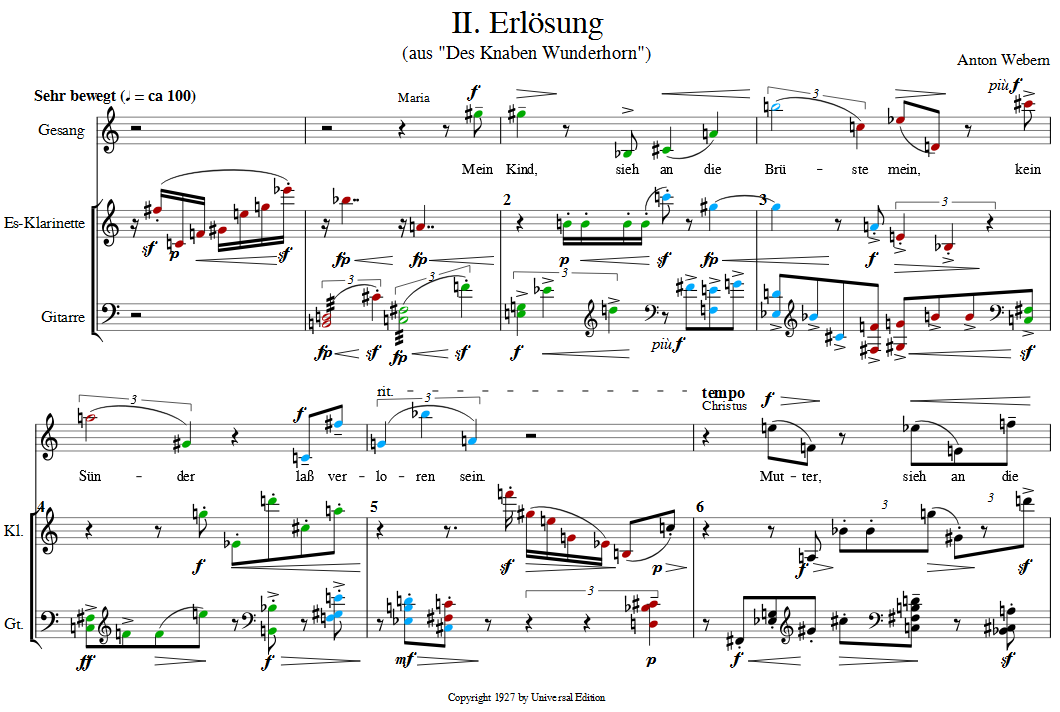 We’ve coloured up the first seven (red, green, blue, red, green, blue, red) of the tone-row (actually set) block instantiations. Apart from the slight ambiguity of which of two pitches in a guitar’s tremolo comes first, the sequence of pitch first-appearances across the instrumentation is – in all seven cases [except the last ‘interesting’ one] F# C F G# E G E♭ B D B♭ C# A.

One might notice the overlaps. For instance the first ‘green’ set begins before the earlier ‘red’ one has quite finished, and these overlaps continue as the piece progresses. But there’s no change in the particular sequence of pitch classes.

So, out of bars 1 to 3, one may pull out the first red (bars 1 and 2) and green (bars 2 and 3) blocks to confirm the (tremolos notwithstanding) sequence. You may painstakingly, if you wish, verify that the following blocks follow the same tone row (i.e. no inversions or retrogrades): 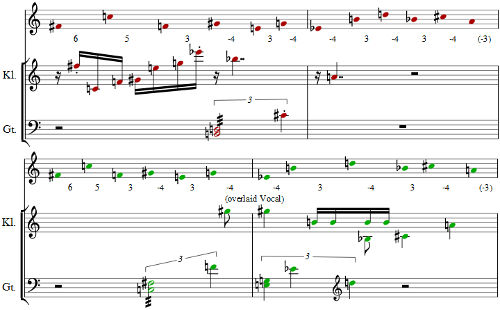 (although the 0 hardly needs to be underlined as its presence is demanded by the nature of the presentation). So what’s with this 3/6 head/tail swap? The worst possible place to happen for a lookup, wrecking both the tone-row and the interval-sequence index? The reference authority cited for this tone row is, in fact, a footnote in a journal article by the one and only David Lewin:

(from A Theory of Segmental Association in Twelve-Tone Music, D Lewin, Perspectives of New Music V#1 N#1, Autumn 1962) where one may clearly see the A after the initial F# and the terminal C in the upper (Φ0) line in contrast to the actualité of Webern’s C and F#, easily seen (multiple times, as if to nail it firmly into your head) in the above score-snippet.

Lewin’s exposition is – by the way - quite legitimate (his article concerns hexachords and segmentation). As he says, earlier on (in regard to Schoenberg’s Op 36 Violin Concerto):

“These examples are of considerable value in cautioning us against the naïve but plausible assumption that all effective associative relations in such music as this must be presented explicitly. The reader is urged to keep this moral in mind throughout the sequel. Of course, the extent to which we will recognize any such relations, whether explicit or not, is heavily dependent on the extent to which the compositional presentation of the notes involved supports or obscures the abstract relation, and/or the extent to which the sonorities involved have been explicitly established as referential.” [our emph]

What appear to be the 'obvious' tone rows (or, equivalently, interval-class sequences) - by which we mean those sets or sequences readily available to a listener or a score-reader (bearing in mind Castine’s caution), in contrast to those other, rather abstruse, representations available to a reader of somewhat rarefied musical journals - may not be terribly useful when interrogating a database to discover them. Fortunately, other rather more instantly available - even to a non-musician - indexes such as the composer's name or the work's name are also present.