By a 'seventh' we just mean a tetrad in the 12-tone 'universe' built from stacked thirds (either major or minor) each third being constructed by skipping exactly alternate scale notes. Further, the whole tetrad is constructively (i.e. with no inversions) contained strictly within the span of one octave. The commonest seventh chords encountered are the minor 7th, the major 7th and - perhaps the most well known of all - the dominant 7th, often known simply as the 7th.

The diatonic scale - with its (major, or Ionian Mode) semitone skip pattern of 2212221 - can carry four such stacks, the aformentioned three, plus the one beginning on the subtonic, the 'half-diminished' or 7♭5 chord. Naturally this capability obtains for all seven modes (Ionian, Dorian, Phrygian, Lydian, Mixolydian, Aeolian, Locrian).

The Melodic Minor scale - with its semitone skip pattern of 2122221 - can carry five such stacks. Although it can no longer support a 'standard' major 7th, this loss is amply replaced by two others, the more unusual major augmented seventh +M7 rooted on the scale's tonic, and the 'psycho chord', the minor major seventh mM7 - rooted on the scale's submediant. Again, naturally, this capability obtains for all seven of this scale's modes - more usually regarded as scales in their own right (e.g. Locrian Super, Altered, Melodic Minor, Javanese, Lydian Augmented, Overtone, Hindi, Locrian Natural, etc.).

But there are two more 7ths. All seven may be counted systematically. Starting from a root note labelled 0 you add either 3 or 4 semitones (i.e. the minor or major third), then those two 'waypoints' each offer two further choices by adding 3 or 4 semitone skips, finalising to 8 choices with the concluding 3 or 4 semitone skip to finish the tetrad. The 8th choice is excluded, however, as 4+4+4 tops it off with the root (albeit an octave above) and is not a seventh chord.

In order of 'thirds-stacking' then,we have:

As 4-gons embedded within the chromatic 12-gon, they may be represented thus (tonic, or root, note at the top, scale ascent clockwise):

Note that the tetrads are generally 'closed' with interval skips of less than 3 - this is simply a fourth skip necessary to complete the tetragonal embedding within the 12-tone dodecagon and should not be seen as part of the seventh's construction. Also, blue indicates the chords represented are their own inversions whereas pink pairs are mutual inverses (e.g. half-diminished is an inversion of 7th, and vice versa).

In the key of F (chosen mainly to confine the tetrads behind a treble clef fence) these chords are:

No heptatonic scale constructable from just half steps or whole steps (interval strings comprising only 1s and 2s) is capable of supporting all of these sevenths. It's necessary to include a 3 step, and - once included - it must be flanked on each side by 1 steps otherwise a two note jump in either direction would exceed 4 semitones and break the minor/major third requirement. This leaves four skips of 1s and 2s - needless to say, consecutive 1 skips are also prohibited since they'd lead to two note jumps incapable of providing any kind of a third (naturally we regard a diminished third as out of bounds).

And the scale known commonly known as the Harmonic Minor, with its interval string of 2122131, is the 'only' heptatonic scale able to accommodate all seven tetrads. The word 'only' is in scare quotes because, as with all heptatonic scales, it has seven modes and these, too, have acquired their own names (often several) as scales, e.g. Locrian Ultra, Harmonic Minor, Mohammedan, Locrian Natural 6, Major Augmented, Harmonic Major, Lydian Diminished, Romanian, Phrygian Dominant, Spanish, Jewish, Aeolian Harmonic etc..

In fact, as the interval string is reversible (say, to the Ethiopian scale, interval-strung as 2212131) in a way that the diatonic and melodic minor 'modes' are not (both of which are their own inverses), a further seven scales or modes are available to support the seven sevenths. There are thus up to fourteen in all.

As an illustration, here's a descent through the scale degrees of an Indian scale (also known as Makam Huzzam, Maqam Saba Zamzam, Phrygian flat 4, according to this catalogue of scale names - thanks to Paul Erlich for pointing me there) showing each of the seven sevenths:

An Odd Connection to Block Designs

We have seven 'shapes' (see the above tetragons) embeddable within a seven-sided polygon. Perhaps the simplest example found in every introduction to the subject matter of block designs is one generated by quadratic residues in a field of integers modulo a prime number, itself congruent to the number 3 modulo 4, the first 'interesting' such prime being 7 (3 itself being too trivial). More often than not, the Fano Plane turns up as a diagram:

Such designs are symmetric in that the number, v, of varieties being distributed is the same as the number, b, of blocks where each block holds k distinct varieties. The varieties are to have equal representation - r of each - throughout the whole design. Seen as a rectangular arrangement of b blocks it's easy to see that vr = bk.

A less obviously visualised property of the block design - in this case a 2-design - is that each pair (hence the 2) of varieties is also equally represented. There are v(v-1)/2 possible pairs and if appearing λ times amongst the b blocks (of k(k-1)/2 pairs in each block), we must have that λv(v-1)=bk(k-1) or, using the earlier equation, λ(v-1)=r(k-1).

It's important to remember that block designs are a way to disperse varieties of objects in a way that - on the face of it - looks somewhat random or unpredictable but which is in fact engineered to give each variety equal exposure in several positions (blocks, the location or sequence of which is unimportant). In the case of 2-designs, each possible pair of varieties will also turn up the same number of times. In the more general t-design case, each t-sized subset of the v varieties (of which there are v(v-1)(v-2)…(v-t+1) distinct possibilities) have equal representation.

Although the designs themselves may be conveniently be built from integers - using the heavy lifting machinery of addition, multiplication, exponentiation etc. - once the design has been generated the numbers may be replaced by something more abstract (the integers’ responsibilities then being delegated, relegated even, to mere labelhood). These objects or varieties can be anything (well, anything distinguishable) and need not be integers. They may be breeds of plant, species of bacteria,

It may seem perverse to sharpen the G in what would normally look like a perfectly ordinary chord sequence in the C major scale, but there's another, seveny, musical reason for it - and it's not the (implied) 7/4 time signature, but that the fact that each triad might be seen as a tetrad missing its fifth. Respectively those missing fifths would be A, B, C, D, E, F and G#. We shall put them in the bass (labelled with the integers 6, 0, 1, 2, 3, 4 and 5) and bung in an extra root note below. Notice that we would then have the complete sequence of all seven sevenths: 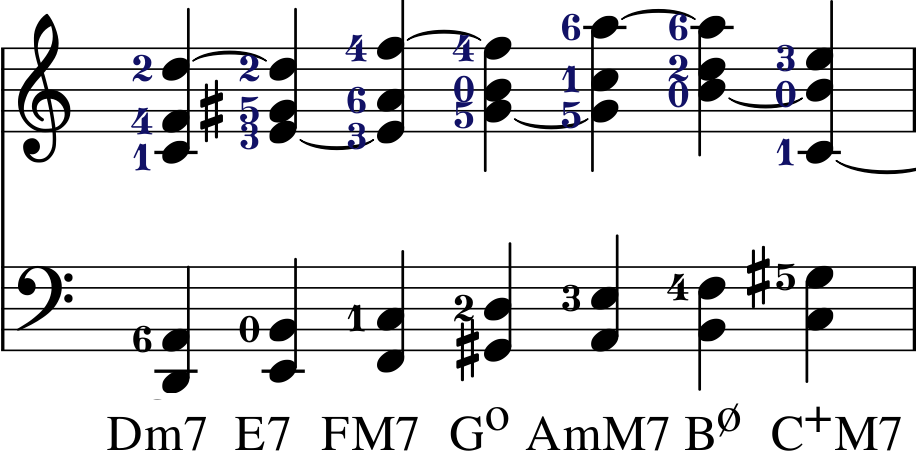